A political campaign is an organized effort which seeks to influence the decision making process within a specific group. In democracies, political campaigns often refer to electoral campaigns, by which representatives are chosen or referendums are decided.

Political advertising is a form of campaigning used by political candidates to reach and influence voters. It can include several different mediums and span several months over the course of a political campaign. Unlike the campaigns of the past, advances in media technology have streamlined the process.

Campaign strategies of Indian political parties have a rarely moved away from traditional methods of broadcast campaigning of printing campaign posters, playing tv and radio ads and door-to-door campaigning. These methods have given them results in the past and so few campaign managers saw reason to change a winning strategy. There is always apprehension about adopting something new and politicians were in unchartered waters when it came to moving a large part of their campaign to a digital format. Moving towards a digital medium also poses the threat of leaving out the rural voter bank who have limited access to smartphones and internet. The biggest issue faced was that there was no completely accurate voter files available to leverage targeting. 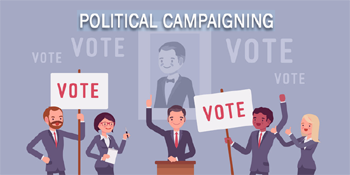